You have no items in your shopping cart.

Product was successfully added to your shopping cart.

This entry was posted on August 1, 2021 by SecretFandom. 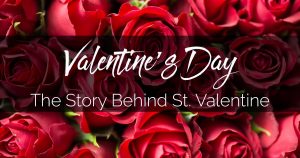 Valentine's Day is celebrated on February 14th every year. In the United States and other parts of the world, sweets, flowers, and gifts are exchanged between relatives in the name of Valentine's Day.

Every February 14th is a celebration of love and romance. On this day, the restaurant is full and engagement photos flood your social network. People search for various valentine day celebration ideas to make this day special. But what is the story of valentine's day, and how was valentine's day started? Who is this mysterious saint and where do these traditions come from?

Explore the history of valentine's day, from the ancient Roman Lupercalia ceremony that greeted the spring to the card-sending customs in Victorian England.

The Origin of Valentine's Day

So how did Valentine's Day come from and what is the origin of valentine's day? Many people believe that Valentine's Day is named after Saint Valentine, a beloved saint who was executed in ancient Rome on February 14th in the 3rd century. However, several people called Saint Valentine were actually executed during the reign of the Roman emperor Claudius Goth.

Who is Saint Valentine and what is the story behind st valentine day? The Roman Emperor Claudius II never allowed men to marry. The emperor believed that single men were better and more dedicated soldiers, but Saint Valentine did not believe in the ideology of Claudius II. One day, when Claudio discovered a secret marriage, Valentine was imprisoned and sentenced to death.

In prison, Saint Valentine often took care of the blind daughters of inmates and jailers. There is the story of saint valentine that Valentine became good friends with the jailer's daughter and healed her blindness. On the day of the execution, Valentine wrote a letter to the jailer's daughter and signed it "From your Valentine". Valentine was executed on February 14, 270 AD. It is for this reason that this day is related to love. And this is all about how did st valentine's day start.

Nowadays, Valentine's day is celebrated all over the world full of love and joy. People also prefer sending flowers and other gifts to their loved ones via flower delivery online.

The Early History of Valentine's Day

When we are talking about valentines day history, it's all connected to the history of saint valentine. Valentine's Day is named after Saint Valentine, a Catholic priest who lived in Rome in the 3rd century. There are many valentine's day facts and history, and over time, these stories have become the legends we know today. In Valentine's life, many Romans converted to Christianity, but Emperor Claudius II was a pagan and made strict laws governing what Christians can do. Claudius believed that Roman soldiers should be completely dedicated to Rome, and therefore passed a law prohibiting them from marrying.

Valentine began to marry these soldiers in a secret Christian ceremony, which was the beginning of his belief in the importance of love. In the end, Valentine was caught and imprisoned for his crimes against Claudio.

So when it starts with such a dark beginning, how do we celebrate Valentine's Day with flowers, chocolates, and love letters? For many years, mid-February is usually famous for celebrating the days of love, so it is not surprising that romance is related to festivals.

Today, people continue to send flowers or express their affection on special occasions. Whether they want flower delivery in Delhi, Mumbai, or anywhere in India, they can easily send it via various online flower shops. In addition to flowers, other contemporary Valentine's Day gifts include chocolates, candy hearts, and cards. Whether you love it or hate it, it is hard to avoid the joys of Valentine's week! From the pink and red window display to the piles of heart-shaped chocolate boxes, you will no doubt know when Valentine's Day will arrive.

This entry was posted in Valentine and tagged story of valentine's day, how was valentine's day started on August 1, 2021 by SecretFandom. ← Previous Post Next Post →